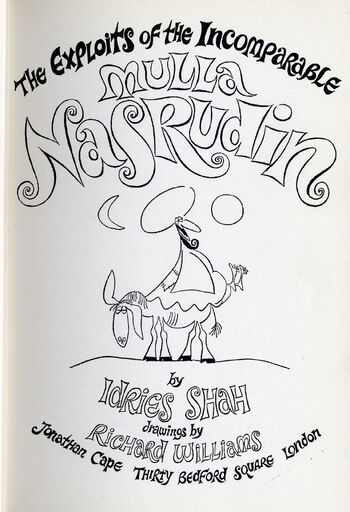 The Exploits of the Incomparable Mulla Nasrudin is a book written by Idries Shah and illustrated by Richard Williams.

The book is package of multiple maghrebian jokes featuring the character of the optimistic Mulla Nasrudin, "the mad man who was wise". His logic, unlike any other's, allows him to pass any trial without inconvenient.

It is arguably from illustrating this book that Richard Williams got the idea of doing a movie about Nasrudin, which was never completed as it was supposed to be but ended up morphing into The Thief and the Cobbler.

Retrieved from "https://thethiefarchive.fandom.com/wiki/The_Exploits_of_the_Incomparable_Mulla_Nasrudin?oldid=3983"
Community content is available under CC-BY-SA unless otherwise noted.